Information on the team's main instruments and projects.

Built in the mid-1960s, the Nançay Decimetric Radio Telescope (RTN or NRT), equivalent in sensitivity to a 94 m diameter dish, is the only single antenna European radio telescope entirely dedicated to the decimetric band (1.1-3.5 GHz). The instrument operates continuously, 24 hours a day, 365 days a year. It allows long-term and/or large-scale programmes to be carried out and offers the possibility of observing on alert (monitoring the explosion of a supernova, radio emission associated with a gamma-ray burst or a gravitational event, new comets). For example, the NRT has produced the largest number of galaxy measurements at 21cm wavelength after the Arecibo radio telescope, and it currently provides the world community with the densest and most accurate millisecond pulsar timing series at the European level.

Ismaël Cognard is the scientific manager of the instrument. He coordinates its operation and maintenance with the teams of engineers and technicians at the Radioastronomy Station of Nancay. Gilles Theureau is in charge of the Observation Service associated with the instrument, which ensures the return to the community within the Institut National de Sciences de l’Univers du CNRS (INSU). 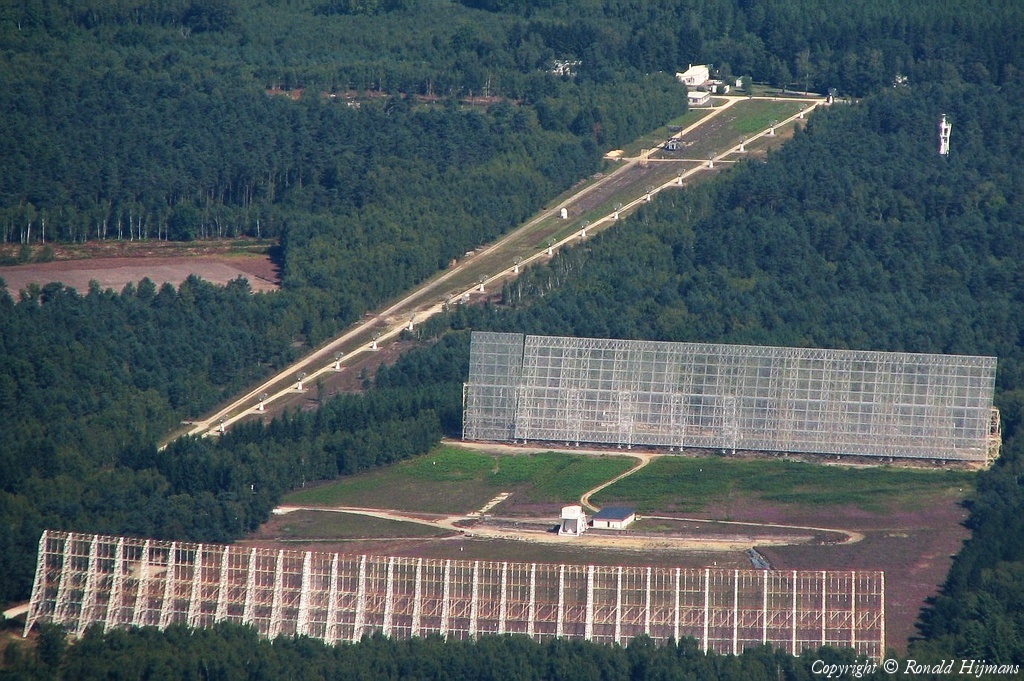 NenuFAR (New Extension in Nançay Upgrading LOFAR) is the latest radio astronomy instrument to be installed in Nançay. Its construction began in 2014 and will continue until 2020, with observations starting in 2019 with 75% of its nominal collecting area. This radio telescope observes at the lowest radio frequencies accessible from the ground, between 10 and 85 MHz. It is a compact array of 1938 antennas, grouped into 96+6 mini arrays of 19 antennas. The 96 mini-arrays of the core form a highly sensitive phased array (superior to that of LOFAR’s core in the Netherlands) allowing spectro-dynamic studies of variable radio sources such as pulsars, magnetized exoplanets, storm lightning in the atmosphere of the giant planets of the Solar System, erupting stars or other transient phenomena, such as Fast Radio Bursts (FRBs) or radio emission associated with atmospheric showers phenomena caused by very high energy particles or radiation. In imaging mode, one of the most exciting topics of the instrument is the mapping of the power spectrum of the 21-cm signal produced by the intergalactic medium during the dark ages of the universe, at the time of the formation of the very first stars and galaxies.

The Astrophysics team of LPC2E is heavily involved in two key scientific programs of the instrument: 1) the study of the pulsar population and their multiwavelength emission mechanisms, and the study of turbulence in the interstellar medium from the variations of the signal dispersion; 2) the search for giant exoplanets by the interaction of their magnetic field with the wind from their host star. The team also made a significant contribution to the instrument’s commissionning and design of its coherent UnDySPuTeD spectral analyzer and dedispersor.

LOFAR is a European radio interferometer managed by the Netherlands, which is deployed throughout the continent. It currently consists of 51 stations, each hosting 192 antennas covering the frequency range from 15 to 250 MHz. The French station FR-606 is located on the Nançay site and provides the longest interferometric bases, particularly for high spatial resolution radio imaging of the order of a fraction of an arcsecond.

The LPC2E Astrophysics team uses station FR-606 in standalone mode for long-term pulsar monitoring to study variations in radiation beam flux and profile, as well as variations in signal dispersion and scintillation imprinted by crossing the interstellar medium. These measurements allow us to study the physics of neutron star emission, as well as turbulence and magnetic field in the interstellar medium. The group is also involved in observation programs with the instrument as a whole (ILT for LOFAR International Telescope), in particular for the search for new pulsars, for the search for exoplanets in radio, or for the study of storm lightning in the giant planets of the Solar System. Jean-Mathias Griessmeier is in charge of the Observation Service associated with the instrument, which ensures the return to the community within the Institut National de Sciences de l’Univers du CNRS (INSU).

The Fermi satellite was launched in 2008 with two gamma-ray instruments on board. One of them, the LAT (Large Area Telescope), has detected more than 250 gamma emitting pulsars in the energy range between 20 MeV and 300 GeV. These discoveries were made possible in large part thanks to the contribution of radio observations made with the NRT in Nançay. Thanks to regular monitoring in radio and to the obtaining of precise ephemerides, it has been possible to fold the rare gamma photons in phase with the rotation of the pulsars and reveal the pulsation. The comparison of radio and gamma emission beams has also provided new answers to the emission mechanisms at work in the magnetospheres of neutron stars.

Lucas Guillemot coordinates gamma pulsar timing observations with Fermi and the NRT and makes the data available to the national and international community. This activity is an Observation Service of the Institut National de Sciences de l’Univers du CNRS (INSU). 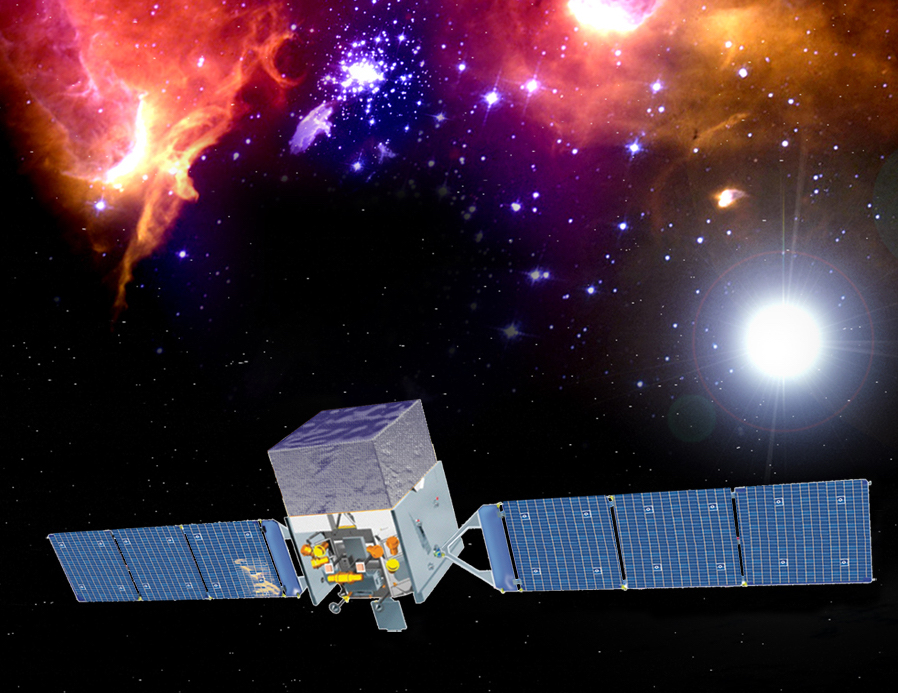 LISA (Laser Interferometer Space Antenna, scheduled for launch in 2034) is a European Space Agency (ESA) project to place a constellation of three satellites on an heliocentric orbit for the purpose of measuring gravitational waves in the milli-Hertz range. The astrophysical sources targeted are the binary of compact objects of stellar masses (pairs of two neutron stars or two white dwarfs, star-to-nutron/dwarf-white or star-to-nutron/hole-black binary), the interaction of stellar objects on a massive black hole (extreme inspiral mass ratio – EMRI) or the fusion of super massive black holes during hierarchical galaxy formation.

The ultra-precise radio timing programmes of pulsars are complementary to future LISA observations, since they allow to characterize the gravitational emission of binary neutron stars and neutron-star/white-dwarf pairs from the evolution of their orbital elements (advance of the periastron, variation of the period and of the half-major axis). They thus allow both to select sources of interest for LISA and to increase their detection possibility by directly observing their gravitational emission. Conversely, one can search for a pulsed radio emission in new LISA sources, and confirm eventually their nature as a binary pulsar. In addition, the binary supermassive black holes, which we hope to detect in their inspiraling phase thanks to the timing of a millisecond pulsar network (PTA programs), will become LISA sources a few decades later at the time of their fusion. The Astrophysics team of the LPC2E participates in the LISA France group, through the support provided by radio astronomy and for theoretical developments on the gravitational emission of EMRIs. 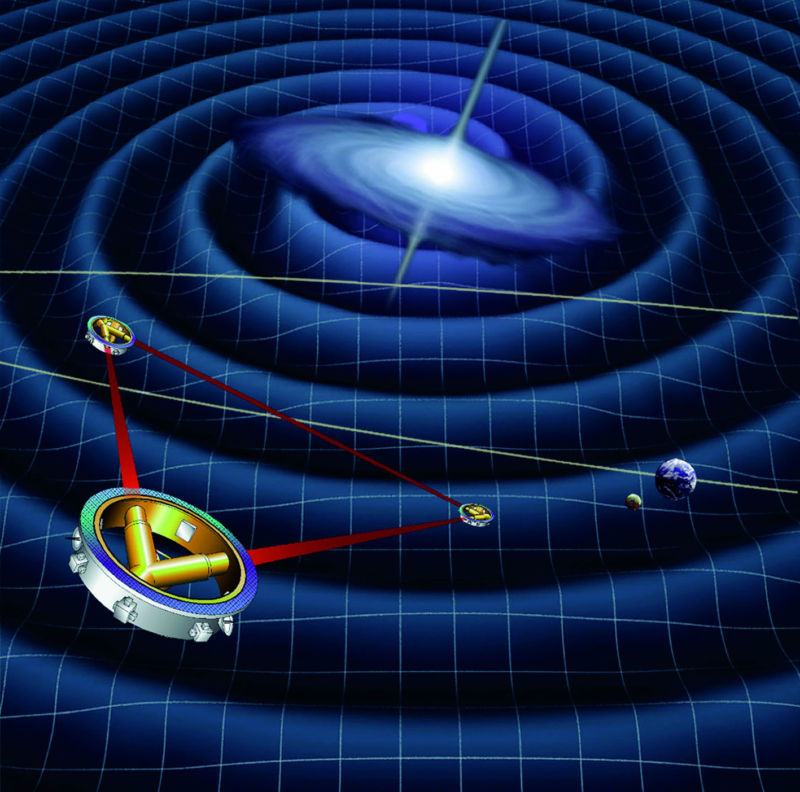